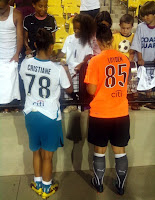 KENNESAW, Ga. -- All three Chicago Red Stars participants played the bulk of the second half during the 2010 WPS All-Star Game presented by U.S. Coast Guard Reserve on Wednesday night at KSU Soccer Stadium.

Red Stars forward Cristiane entered Wednesday's match for the Boston Breakers' Alex Scott at the start of the second half for Marta IX as the squad brought in five reserves. Cristiane is the Red Stars' only two-time All-Star. She started for the WPS All-Stars last year during WPS's 4-2 victory over Sweden's Umea IK on Aug. 30, 2009, in Fenton, Mo.

Read the full post at ChicagoRedStars.com.
Posted by Charlie Corr at Wednesday, June 30, 2010 No comments:

BRIDGEVIEW, Ill. -- The Chicago Fire's Lamar Hunt U.S. Open Cup third-round match on Tuesday was a mess in more ways than one.

The few passing moments in the offensive third, the petty extracurriculars between the Fire and United Soccer League Second Division opponent Charleston Battery, the two scoreless 15-minute overtimes, the questionable officiating decisions -- these elements dragged out an uneventful feeling within the match.

Chicago's lackluster effort resulted in a 3-0 loss in penalty kicks as Charleston advanced to the Cup quarterfinals in front of 2,526 at Toyota Park. Charleston next plays Major League Soccer's Columbus Crew. The Crew defeated the D2 Pro's Rochester Rhinos, 2-1, on Tuesday night.

"I don't have anything to complain [about] to our players. They tried the whole match to win," Fire head coach Carlos de los Cobos said. "But we missed some options. We weren't effective."

Read more at ESPNChicago.com.
Posted by Charlie Corr at Tuesday, June 29, 2010 No comments:

Last season, the Vineland, N.J., native played second fiddle to U.S. Women's National Team starting goalkeeper and former Saint Louis Athletica starter Hope Solo. Loyden had a few opportunities in the net during the inaugural 2009 Women's Professional Soccer campaign, including a shutout against the Red Stars. But she was not a part of the regular week-to-week spotlight.

"I think it was the best environment possible to learn, grow and develop as a goalkeeper," Loyden said. "It helped me transition a bit better having that experience under my belt, although I think I am still adjusting and still have a lot of work to do."

Everything changed this season with the Red Stars, and now Loyden is representing the team at this Wednesday's 2010 WPS All-Star Game presented by U.S. Coast Guard Reserve.

"I was definitely shocked and surprised," Loyden said of her inclusion. "There are so many talented players in this league, and to be chosen is an honor. It should be a lot of fun to play with my Red Stars teammates and my teammates of the past."

Read more at ChicagoRedStars.com.
Posted by Charlie Corr at Tuesday, June 29, 2010 No comments:

McBride was on the 2006 U.S. squad that fell to Ghana, 2-1, and was eliminated from the Cup. He played in the full match and had a diving header that hit the post. Nyarko is a native of Ghana, and he knows he is in the minority among the fandom surrounding him in the Fire clubhouse.

"I'm remaining quiet right now because there are a lot of Americans in the locker room," Nyarko said. "I'm not talking that much. Come Saturday ... I don't know if we're going to watch it either because we're traveling. But I'll be cheering for Ghana."

McBride was on the wrong end of the last World Cup result against Ghana, but this year's rematch is much different. Both teams have advanced past the group stage, with the U.S. winning Group C and Ghana taking the runner-up position behind Germany in Group D.

"When you play in an elimination round, anything can happen," McBride said. "So you have that extra bit of excitement. I think there's a bit more tension, knowing that every possible mistake you could make could affect the outcome. It gets you more focused, and you get more excited because of the possibilities."

Read more at ESPNChicago.com.
Posted by Charlie Corr at Thursday, June 24, 2010 No comments: 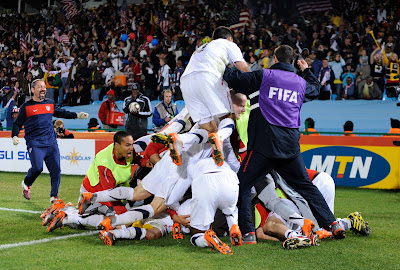 Emotions built as the clock ticked away Wednesday during the United States' final Group C match against Algeria in the 2010 FIFA World Cup. Which way would the tide flow for the U.S.? Would the Americans fall short once again from advancing through the group stage, or could they pull off the miracle goal?

In the 91st minute, the U.S. found that long-awaited clutch strike as Landon Donovan's second-half stoppage time goal carried the Americans to a 1-0 victory over Algeria and first place in Group C.

The U.S. could not afford a draw, because also on Wednesday, England advanced through the group stage with a 1-0 win over Slovenia.

"It's a match where both teams need to win, so it turns into a very wide open game," former Chicago Fire and current U.S. head coach Bob Bradley said in the postmatch news conference. "Algeria is a very good team, skillful and well-organized, but the game now takes on a different tone just because of the need for both teams to win."

Read the full story at ESPNChicago.com.
Posted by Charlie Corr at Wednesday, June 23, 2010 No comments: